Also be sure to visit:

These do not come up for auction every day, although I do not think that they are so rare as there seems to be plenty in the hands of collectors and museums. It is just that nobody seems to let go of them once they get a pair. Still, unfortunately, this falls out of my price range. It doesn't fit in any of my collection drawers either. Yeah, that's my excuse. 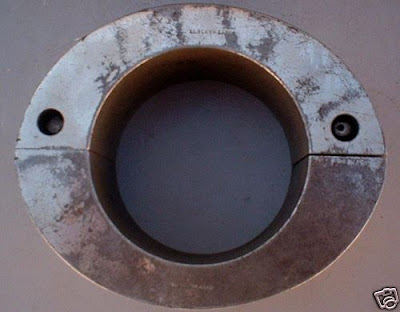 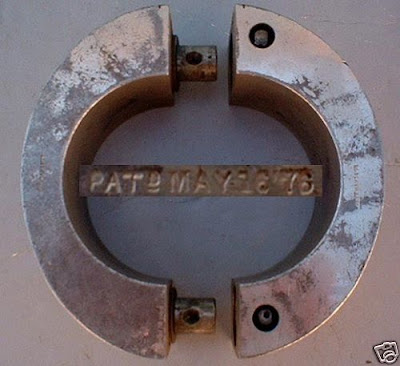 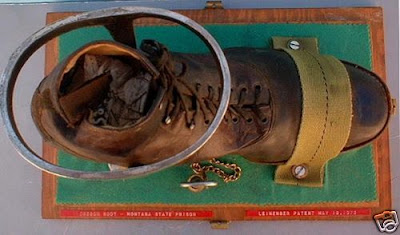 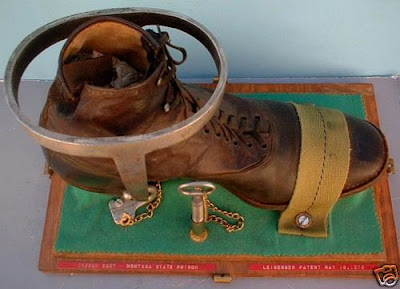 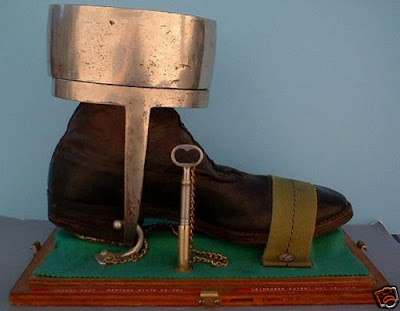 VERY RARE ITEM -- OREGON BOOT prison shackle patented in 1876 & used by the old west prisons, marshals, & sheriffs....... OREGON BOOT comes complete with its DONUT, STIRUP, SHOE, KEY & even a nice wood display & carrying case..... THIS - OREGON BOOT has been pictured & featured in several mags & booklets over the years..... no cowboy, prison, or restraint collection is complete WITHOUT an OREGON BOOT & in most collections, the OREGON BOOT would be considered the center piece !!! - eBay (Ends 28 June 09)

Here are some more details about the Oregon Boot:

A Brief History of the Oregon Boot

The Oregon Boot, or Gardner Shackle as it was properly known, was patented July 3, 1866 by , then Oregon State Penitentiary Warden, J.C. Gardner. The shackles were manufactured at the Penitentiary by prisoners.

Each shackle consisted of a heavy iron band that locked around one ankle. This iron band was supported by another iron ring and braces which attached to the heel of a boot. These shackles weighed between 5 and 28 pounds apiece.

The Boot was placed on one leg only. This kept the inmate off balance and deprived him of agility.

At the time the Oregon Boot was invented, the territorial Prison and later the Penitentiary had an enormous escape problem. Mr. Gardner and subsequent wardens felt that the inmate population could not be adequately controlled without using the Gardner Shackle on each and every prisoner.

When Gardner was replaced as the warden, he obtained a court order preventing the use of the shackle without payment to him. The Oregon Legislature did authorize the payment of funds to Gardner that same year.

Wearing the shackle for extended periods of time caused extreme physical damage. Inmates would be bedridden for weeks at a time in extreme pain. The Gardner Shackle became known as a man-killer to the prisoners who wore them.

In 1878 Superintendent Chadwick discontinued the use of the shackle on a full time basis. Chadwick still used the shackle for disciplinary purposes. Virtually all counties and municipalities shackled their inmates when transporting them.

It isn´t known when the last time the Oregon Boot was used. As late as 1939 a prisoner was "ironed out" in Mill City, Oregon so that he could be transported to the Penitentiary. - Oregon.Gov

I have an Oregon Boot for sale,jritter@wvi.com

I have one too with a key and the boot piece. My grandfather gave it to me. But the set would be even batter!

I am looking for just the donut ring.

This is a blog about various locks, keys, handcuffs and all other sorts of locking and restraining devices.

Also, in addition to covering these items, I am always on the lookout to add more locks, handcuffs and other items to my collection. So do contact me if you have something you want to sell!

1996 Edition is the Newest The Padlock Collector Guide Book